We started off with one Freezer, trying to convince ourselves that one would be sufficient, this was an upright drawer type, the theory being it would be easier to find stuff, we also promised ourselves that we would not freeze veg or fruit.
It soon became obvious that one freezer would not be sufficient, so a second one was bought, again a drawer type, quickly followed by a small chest freezer, just for poultry, then the forth one joined us, for the over flow! We might just have well bought a large chest freezer .
We still can't find things, as soon as you take anything out, to make space it's impossible to get stuff back in with out leaving air space which costs to keep cool.
Plenty of veg found it's way into the freezers, why do veg all have to come at the same time? Broad beans freeze well as do Peas so they got frozen, French beans and Fennel also freeze OK, Runner Beans, Cauliflower and Broccoli don't do well but that hasn't stopped us with the exception of the Runners, which we have salted.
Then there is the fruit, Lemons, Oranges, Gooseberries, Blackberries and Raspberries all found their way in the freezer, but now is the time for the poultry to be slaughtered, the Hubbards are up to weight as are the La Brese and the Cornish Game fowl we also have quail waiting to be slaughtered. Time to start processing fruit.
We were out of Marmalade, so more has been made.
The twelve pounds of Blackberries have now been turned into Blackberry Cordial, these yielded six pints of juice which after straining through the jelly bag overnight
then boiled with sugar and cardamom, 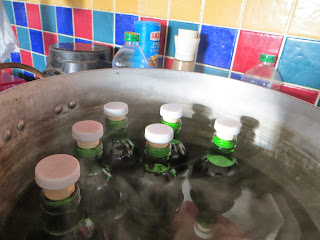 then into sterilised bottles which are then boiled in a hot water bath for ten minutes
to complete the process,
the Gooseberries have now been bottled.
Raspberries and Lemons will remain until we need to use them in a dessert, they don't take up too much space. Whether we have created enough space for fifteen birds plus the quail remains to be seen. We won't be short of food this year that's for sure.
The apples that we bought last week at the Farmers market have now all been sorted, those which are perfect have been wrapped in news paper and stored in a box in a very cool spot, the less perfect ones will be used or bottled in the next week if I can find any bottles that is. 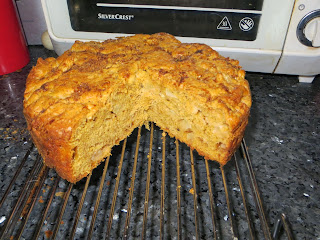 I now have plenty of apples for the West Country Spiced Apple cake, it's a simple cake to make and quite delicious. 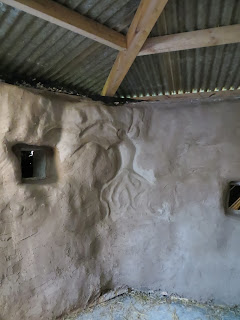 The Straw  building is progressing well, the first coat of internal plaster has been applied and our helper, who is quite an artist has used the natural contours to create  sculptures, 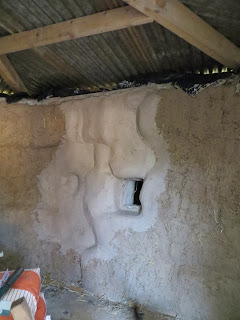 the living roof is now growing, we haven't planted it yet it's just seeds that were in the compost already, I still hope that we will have mainly Clover on it though as Clover forms a good root mat.
I have done the last of the glass paintings for the 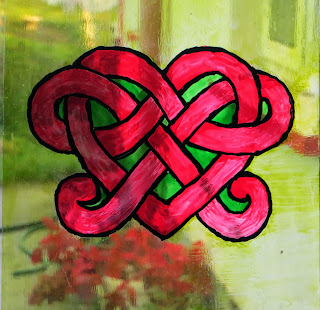 windows and door,
and Simon is busy carving mushrooms for the garden.
With luck the whole area should be quirky and full of character.
Jasper the latest kitten is a little unwell at the moment he has an infection so the vet came out to him and gave him a couple of injections, Sparkie is a little upset as his playmate is rather quiet, but he has decided that kitchen towel is a great thing to play with and is doing a cat version of the Andrex puppy. 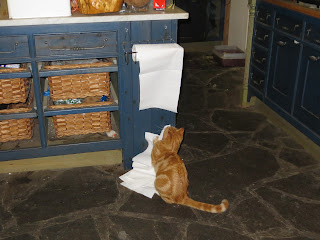 Thanks Sparkie, just what we need, lots of shredded kitchen towel all over the kitchen.

Posted by Renovation in Galicia at 2:18 PM